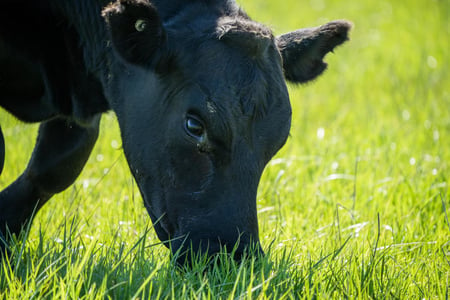 Bovines are in the mammal class of the herbivore family, in the suborder of ruminants. Their diet is entirely vegetarian and they have a digestive apparatus characterised by a stomach which is divided into four main areas, with only the last one in charge of actual digestion. This kind of animal, in which the assimilation of food plays a fundamental role, requires specific care when it comes to diet.

What a bovine eats must be assimilated through rumination in order for it to be transformed into energy and therefore into nourishment that is used for the animal's activities.

A bovine's stomach is made up of three nonglandular forestomachs, known as the reticulum, rumen, and omasum, followed by a normal glandular stomach, called the abomasum. The predominant characteristic of ruminants is the reflex through which the animal regurgitates, back into its mouth, the plant material that was roughly chewed during initial ingestion. It is then finely ground, re-wet with saliva, and swallowed once more in order to facilitate the fermentation process carried out by microorganisms in the forestomachs.
This process is known as rumination and it is this very characteristic that has made it possible for cows to survive in every natural environment.

The origins of a cow that will be used for milk production, as well as all of its physical and physiological characteristics, affect both its milk production and yield. In other words, the genetic heritage of a cow is what defines its productivity, or rather the maximum amount of milk that the animal can produce. In addition to the resources which are the result of its genetic heritage and the environmental conditions in which it lives, a cow's maximum milk production is also obtained through a proper diet.
This must ensure a proper qualitative and quantitative supply of the nutrients that the animal requires in order to remain healthy and in the proper physical condition for its specific phase of life so that it can reproduce and provide the expected production results.
A bovine's nutritional requirements vary specifically depending on the various physiological phases that the animal goes through during the course of its life:
An animal's nutritional needs must, therefore, be completely met in terms of protein, necessary minerals, trace minerals, vitamins, and energy that can be assimilated by the organism. These elements must also be present in the plant-based fibrous component consumed by each bovine, or rather that which makes rumination possible.

How to evaluate a bovine's Nutritional Needs

What a bovine assimilates comes from the substances created by the fermentation which takes place within the rumen thanks to the work of the ruminal microbiome. This is a complex ecosystem made up mostly of bacteria (more than 200 different species), some species of protozoans, and fungi, all of which live in total or partial absence of oxygen.

The Biomass Determines the Source of Protein
The ruminal biomass is absorbed by the intestine and is the protein that can be metabolised. Fatty acids also contribute to bovine health; this nutrient is absorbed through the ruminal walls and is of fundamental importance for milk production
What the animal actually uses as nourishment is not enough to ensure its wellness, nor is it enough for milk production or to fulfill all of its other essential metabolic functions.
To make up for this deficiency, ruminants are given rations from plant-based protein sources which resemble, as much as possible, the amino-acid composition resulting from the biomass of bacterial origin. This supplement is equal to 30-40% of their diet.
Becoming familiar with the digestive characteristics of ruminants is extremely important to establishing how to fully satisfy a dairy cow's energy requirements in order to maximise its milk production.